THAT TRAPS A GROUP OF

ON A DESOLATE HIGHWAY

OF TERROR WHERE THEY

ARE FORCED TO FEND OFF

ATTACK AFTER RELENTLESS ATTACK FROM THEIR WORST POSSIBLE NIGHTMARE 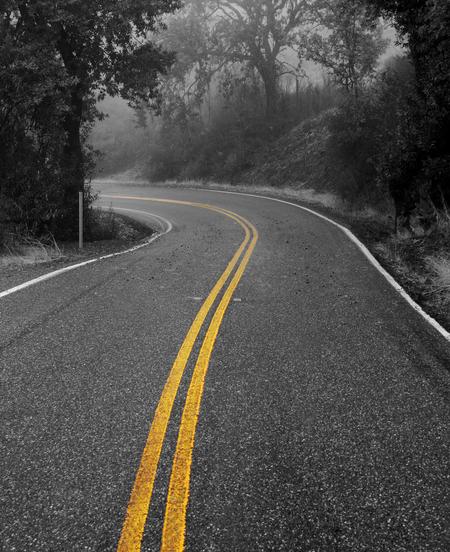 DON'T EVEN TRY IT

Dark. Late. Lonely. A secluded highway. Both ends look like empty, black tunnels. A nighthawk screeches from crooked trees. A wolf howls lonely from a distant outcrop. The shrouded haze of an amber moon hangs above jagged mountains silhouetting saguaros against an inky sky, like forgotten tombstones.

A faint beam suddenly flickers far down at one end...a pair of headlights approaching fast. Closer. The lights separate into four beams...two cars in mid-race. Louder. Quicker. They rumble directly toward camera.

Finally...race over, both cars brake hard into a sliding stop, washing the screen in white glare. Crane up to see a burnt orange Camaro driven by a TOUGH GIRL and a vintage Mustang GT Cobra driven by a defeated YOUNG MAN.

TOUGH GIRL
Half a mile past Breakbone Curve!...
...on my call!

TOUGH GIRL
Think you can handle it?!

She flashes her bra-covered breast with a wicked grin, so he guns the engine.

She cranks "The Devil Went Down to Georgia" on the radio, then shoots down the rest of her beer. She holds the empty can out the window and tosses it high in the air.

All eyes lock on it, as it floats down.

It hits the ground and wham!...accelerators punch the floors, tires screech and the cars tear off in a thunder of hot gravel and scorched rubber.

An SUV quietly pulls to a stop at a remote crossroads with a family of three inside.

FRANK leans on the wheel, extremely sleepy. His WIFE is asleep next to him and his six-year-old son, DANNY, is in the far back, tucked in his own little suitcase fort...his face pressed against the side window, staring out at the dark trees.

Frank hits the GPS. No signal. He picks up a map and studies it. Confused, he flashes his high beams on the sign that says 'RED ROCK ROAD'. He drops the map and turns right out onto the desolate highway.

The Mustang and Camaro come flying around a bend, as the race continues. Accelerators press the boards. Hands grip the wheels. Tires spin fast.

Frank's eyelids get heavier. His head starts to sink. Suddenly distant lights appear in his rearview mirror, so he jerks awake. He adjusts to get a better view.

Danny looks back and sees the lights coming quick. Frank puts both hands on the wheel, holding steady, as the Camaro and Mustang close the gap fast.

He starts to swerve right, but they split wide and thunder past each side, nearly clipping his fenders before powering on ahead.

Danny actually enjoyed the close call, then looks behind and sees another pair of headlights approaching.

This vehicle - dark, black, non-descript - catches up quick, but as it pulls alongside, it slows to match speeds, as if to check them out.

Danny sees...FLASH CUT...a very brief glimpse of something strange inside. He jerks back frozen in shock, eyes wide. Frank holds steady, barely keeping his tires from crunching the shoulder.

The black vehicle takes off ahead, so Danny scrambles into the middle seat scared to death...

DANNY
Dad, that was a monster!

FRANK
Yeah, with no brains.

DANNY
It was, dad! It was a monster!

He dives into the front, grabbing dad tight.

Mom cuddles him safely in her arms, as they watch the vehicle's taillights disappear up ahead.

The young man and the tough girl continue to fly down the high-way, neck and neck. The young man suddenly sees headlights in his mirror coming up quick from behind.

He signals to the girl that it might be the cops, or maybe just another speedster trying to join the race. Either way he doesn't want to get in trouble, so he slows down.

The girl hits the gas and goes even faster...not about to get caught.

She tears around a bend and speeds on. Another bend, then she checks her mirror and sees nothing but darkness behind.

Suddenly she sees headlights speed around the bend right be-hind...but it's not the Mustang. She punches the throttle and squeals away.

The black vehicle is too quick and it's immediately on top of her. It pulls alongside, both cars doing sixty-plus down the lonesome backroad. She looks over. It's too dark to see in.

Suddenly wham!...it slams into the side of her Camaro, nearly running her off the road. She tries to hold steady, but her tires hit the shoulder and she loses control through the gravel.

She manages to veer back onto the road, but the vehicle stays tight with her.

It hits her again, then backs off and slams into her rear fender in a viscous 'pit maneuver'.

Her Camaro slides sideways, catches a tire and flips in a horren-dous, twisting barrel roll.

The black vehicle screeches to a stop, as the Camaro skids on its roof across the blacktop in a massive spray of sparks.

Blam!...it slams into a tree with a concussive, tooth-rattling crunch.

It's totally demolished leaving the girl hanging upside down from the shoulder harness in a bloody mess.

An eerie silence melts over the area. Even crickets start to chirp again.

Her eyes begin to blink open. Thank God she's alive. She strug-gles to unbuckle her belt, but it's stuck. She wipes the blood from her face and sees small sparks shooting from the dash.

She finally manages to release the straps and her body drops to the roof in excruciating pain.

She lies still a moment, trying to gain her composure. She rolls to her side and starts to crawl out, but the glare of the black vehicle's headlights eerily flash across her face, as it slowly approaches.

It stops within twenty yards and the door opens. The tough girl reaches out her arm in desperation.

She suddenly freezes. Her eyes flash horror when she sees what's walking toward her.

​​​A high tension, seat-of–the–pants horror thriller that takes place in a small, rural town where a series of mysterious murders occur on a lonely stretch of highway.

All that local sheriff DAN CHILDRESS has to go on are reported sightings of skeletal apparitions.

Then when he learns that an antagonistic motorcycle gang, called the DEVIL SNAKES, has defiantly returned to settle the area, he must decide whether the murders are the result of their deadly road games...

...or if the horror of an ancient cult has returned to terrorize the towns inhabitants.

Together with the aid of DR. CAITLIN BURT, an attractive, no-nonsense forensic specialist, he desperately tries to search for answers amidst each grisly, unbelievable occurrence that seems to defy logic.

Finally, after one more horrific discovery, they suddenly learn the shocking truth.

Unfortunately, it's too late, and in a bone-chilling, pulse-pounding, thrill ride of a climax, Caitlin, Dan and his twelve-year-old daughter, DECKER, are trapped out on this lonesome highway of terror, where they are forced to fend off attack after relentless attack from their worst possible nightmare.

Written in the spirit of Jaws, THE ROAD easily does for late night highway travel, what Speilberg did for going into the water.